Been having an exciting time with Quiltwow. Thank you all so much for the messages - both here and by email. So good to know you like it and I'm really grateful to those who have blogged about it. Now I have to get on with finishing the last few pieces for the photoshoot of the book.

I decided that the best place to start was with a tidy up. I can't change my mind now about what will go in the book, as it is cast in stone (or typed in ink) in the manuscript which has GONE. Hooray. So, all the 'bits' were sorted out and my workroom tables have reappeared.

The spare bed is still buried so Clive and I have had to work hard at being nice to each other lately. No stomping off to the 'other room'. Perhaps I should suggest this as a strategy for marriage guidance counsellors? In the sort out I found this little piece of nonsense.
. 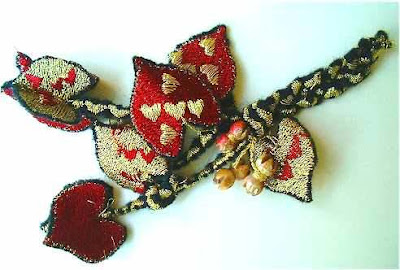 It reminds me so much of Val, as I made it for her Edges and Finishes book. It's a sort of tassel-thingummy. Made it by digitising a heart shape and stitching it out in gold and red metallic threads. Then I stitched a few rows of built in heart patterns. More heart patterns, cut out of felt, were plaited for the cord. Val gave me some little bits of ivory that looked like bones so it was called Hearts and Bones, after the old Paul Simon song. Must make some more cords like that - I'd forgotten how effective they are.

I've been feeling guilty because I promised Arlee some Flower Stitcher work but haven't had time to sort out the samples. Val always made book wraps to keep samples in - such a good idea. 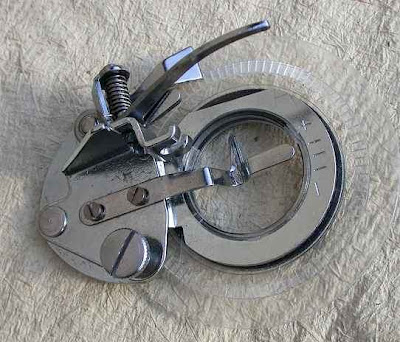 Anyway I decided to put Val's Flower Stitcher article up on the Workshop on the Web Taster site for you. This is a frebee (http://www.workshopontheweb.com/) so anyone who isn't a member can have a look. Lots of good info on using this great little gadget. Clive was giving the site a bit of a makeover so I thought it would be useful. Don't feel nearly so guilty now. Back to the tidying up.

Hi Magie
I do enjoy reading your blog,and often wonder where you get your energy!
The Quiltwow taster is fab and I was so enthused that I signed up yesterday. I have downloaded Picasa and am working on my first postcard.

I will be going to the K&S show in Harrogate next month and I am really looking forward to seeing the exhibition of Val's work.

Oh Maggie, what a good idea. I've just received a flower stitcher, and a new sewing machine with plenty of stitches to try. I had a quick look at the tastes, it is exactly what I need !
Tanks you sooooo much.

Thank you for putting Val's flower stitcher tutorial on the web.It's great. I can't wait to try one.
Moira

Hi Maggie
I just read Val's article - thanks for that - and wanted to tell you that the supremely fab Jaycott's (www.jaycotts.co.uk) sell a 'flower stitch foot' for £8.99. It's in the universal foot section. It doesn't fit my Janome 6600P, but it does work on my 4800QC.
(No connection with Jaycott's - they just have great customer service!)

Maggie thank you for the tutorial on the flower stitcher on the wow site, I wasnt a member when that came out and although I love my flower stitch foot this has given me some new ideas.
I know we will all miss Val for her inspirational work, but thank goodness you are here to keep it up.